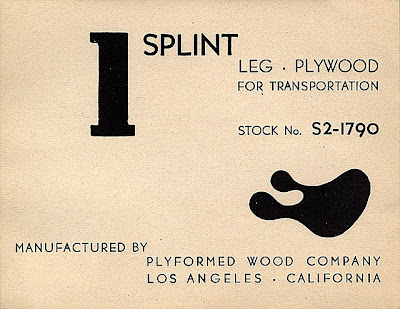 "What works is better than what looks good. The 'looks good' can change, but what works, works."

I was enjoying the extensive online Library of Congress exhibit, The Work of Charles and Ray Eames: A Legacy of Invention today. The Eameses were important mid-20c. designers, who are best known for plywood, fiberglass and wire-mesh chairs and other furniture, among their many other endeavors. Even if you don't know their name, some element of their work is probably familiar to most Americans.

Why is this relevant to disability studies? Well... during World War II, they were part of a team of designers hired by the US government. (This wasn't unusual; my great-aunt Mimi was a shoe designer during the war; the government needed designs that could be mass-produced within the limits of wartime supplies, thus... canvas shoes.) One of the items Ray and Charles Eames designed was a molded plywood leg splint for the US Navy. Note that the original splints are now prized by collectors, like most Eames designs. The Eameses even featured a sculpture made from their splint on their 1944 Christmas card. The splint label above was designed by Ray Eames.

The technical solutions, materials, and sinuous shapes the Eameses used in the splint project were turned, after the war, to the design of durable, ergonomic, molded plywood furniture. Just one more example--like the audiobook, TV captions, Montessori schools, etc. etc.--where innovations are worked out first for disability-related applications, and only later translated to wider use.
Posted by Penny L. Richards at 7:22 PM

very cool- my uncle actually owns an Eames splint! It's proudly displayed on the living room wall, so I've had the pleasure of observing one first hand!