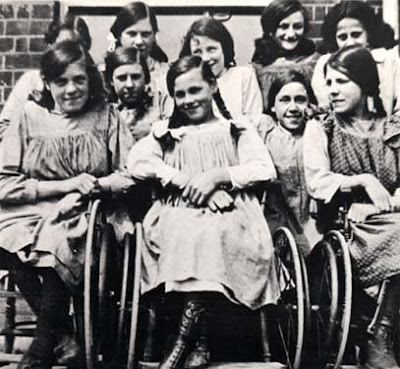 [Image description: a black-and-white photograph of ten smiling English girls in 1915, at least three of them (in front) seated in wheelchairs.]

A remarkable website has come to my attention (hat-tip to Jennifer Bazar). Hidden Lives Revealed is a "virtual archive" preserving the photographs, publications, stories, and sometimes extensive case files of British children in care, 1881-1918. The personal names of the subjects have been removed, but you can access transcripts of correspondence as well as facsimile images. And, because "disability" is one of the keywords in the index, you can find the stories (and there are many such) in which a child's or a parent's disability is a factor in their care arrangement.

Take, for example, J., whose file runs over fifty items. J was born in 1870, and the very first boy in the Society's care. A childhood fall and an accidental burn resulted in physical "deformities." The boy was working as a streetsweeper at age 10; a health inspector removed him from his "wretched and degraded" family and placed him in care. At age 12,

He is now able to run about but a year ago he was compelled to lie on his back & was considered by several doctors in a very precarious condition he is naturally a very good, quiet, little boy & where-ever he has been he was evidently a great favourite. He is decidedly ignorant & can read & write very little.

J. was featured in a Society publication in 1901, as a success story. At the time, the thirty-year-old was working at a printing firm, married, the father of a little girl. But the case file continues for years past this happy ending: there are letters from J himself, and poems he wrote for Society publications. There's a photograph of him c.1923, in a suit and mustache. In 1930, he writes to tell his contacts at the Society that his health has worsened (tuberculosis) and he can no longer do physical labor. There's a flurry of letters as the Society tries to find provisions for this "first boy," but J. died in February 1930.

A. was born in 1892, and orphaned before she was 10. She lived with an older sister who wasn't well-equipped to care for another child; and A. contracted tuberculosis that required a right leg amputation. She was admitted to the Lockett Home for Crippled Children, Southport, in the winter of 1901, in good health. Five years later, a report explains that she's using crutches, healthy and strong, but "her intellect is not very bright." The report concludes that she could earn a living doing ironing if she had a "false leg." "She might also do stocking knitting," opined the writer. Unlike J., we don't know the rest of A.'s story--we don't even know if she got that leg.

Students might quickly take from these case files that work and vocational training are a major concern of the Society--much of the paperwork involves finding placements for teenagers who will soon leave care and need to support themselves. Another issue is morality--standard forms will ask such questions as "Are you aware of her being addicted to any unchaste practice?" The legitimacy and baptismal status of a child is frequently recorded, and the alcoholism and sexual behavior of parents is also a constant theme. Tuberculosis and untreated infections and injuries may strike some students as remarkable common in these materials--an opening to discuss the ways medical care changed in the twentieth century, and how medical history intersects with disability history.
Posted by Penny L. Richards at 11:47 AM