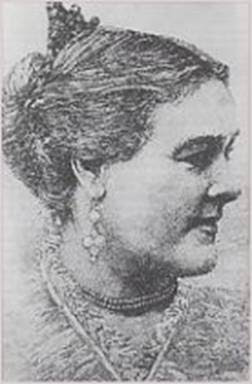 Today is the birthday of American poet and journalist Laura Redden Searing, born on this date in 1839, in Maryland. She became deaf before adolescence, after a bout with meningitis. Laura Redden attended the Missouri School for the Deaf beginning in 1855. After school, she began publishing her poetry under the masculine pen-name "Howard Glyndon." She also worked for the St. Louis Republican, reporting from Washington DC during the Civil War, and from Europe in the later 1860s. She married a lawyer, and had a daughter, Elsa; the marriage didn't work out, and Laura moved to California with Elsa in 1886, when they attended a conference on deaf education and never returned East.

Laura Redden Searing was a proponent of the oral method of deaf education, although she herself never found lipreading a reliable means of following a conversation. Instead, she preferred the pen-and-paper mode, which means that her archived papers (in the Western Historical Manuscript Collection-Columbia) are unusually rich in records of everyday conversations, written on the back of envelopes and other scrap paper.

Want to read more about Searing? Your best bet is Judy Yaeger Jones and Jane E. Vallier, ed., Sweet Bells Jangled: Laura Redden Searing, A Deaf Poet Restored (Gallaudet University Press 2003, part of their Classics in Deaf Studies Series). Or check out the May 2005 essay and interview from Poetry Magazine about deaf poets.
Posted by Penny L. Richards at 4:22 AM

A small town, Glyndon, is named after her pen-name and located in Minnesota, 15 mles east of Fargo, North Dakota. The town had a big celebration in honor of this deaf lady several years ago.

Great item on Laura Redden Searing! She is also featured on 'Notable Searings' in the Searing Family blog at blog.searingfamily.com. Searing family members and others are invited to read and comment..and perhaps provide other on-line references to Ms. Searing.

Anonymous said...
This comment has been removed by a blog administrator.
9:52 PM