Disability Blog Carnival #73 is up NOW!

SpazGirl at Butterfly Dreams has the "Freak Flag" January edition of the Disability Blog Carnival up now, with a fine array of links, nicely curated. Go have a read through the first carnival edition of 2011.

February's edition will be hosted by lilwatchergirl at the blog Through Myself and Back Again. Watch there for more details (or here, when I link to them). ETA: The carnival will post on February 25. Here is the official announcement, giving the theme as "Participation."

And now... it's time to start lining up hosts for the rest of 2011! Here's how it works: We've been doing one carnival edition a month for a while now, and that seems to be fine for the supply of hosts and submissions. So we'll take one volunteer per month, March through December 2011. Hosting is a commitment; think on whether and when that commitment makes sense for you, before offering to host. If you're the host, you choose the date, the theme (or no theme), and how submissions will be received (email, comment threads, tags, tweets, etc.). You decide how to present the carnival--see the past 73 editions for a range of possibilities. And you can publicize the carnival as you see fit--on twitter or facebook or wherever. And as organizer, I'll post useful links here at DSTU (usually to the announcement/invitation and to the carnival edition when it posts).

That's about it. Leave a comment here and we'll work out a schedule.

What we have so far (I'll keep updating this as folks confirm their interest):

February: Through Myself and Back Again

March: Writer in a Wheelchair

North Carolina writer Reynolds Price died today, from a heart attack, just before his 77th birthday, according to a Duke University press release and the Charlotte Observer. Here's the birthday post we had for Price at DS,TU in 2007.
Posted by Penny L. Richards at 6:51 PM No comments:

[Video description: scenes of Papua New Guinea, including beaches, food markets; then we see Francis Kompaon, a dark-skinned young man in a red athletic jersey. There are interviews with him, translated by a voice-over in English, and scenes of him running, playing soccer, and walking in a market. He describes going to school and loving sports from a young age. There is also an interview with his coach, Bernard Chan. A woman's voice narrates the video, telling his history of achievements in competition, and his plans for the future.]

[How do I find the new captioning thing for YouTube videos? I've heard it exists, but this is the first time I wanted it.--PLR]

New Guinean athlete Francis Kompaon turns 25 today. He's a sprinter in the T46 category of paralympic competition--he was born without a full left arm. At the 2008 Paralympic Games in Beijing, Kompaon won the silver medal in the 100m event. Besides the personal achievement, Kompaon had earned the first Paralympic medal ever for Papua New Guinea--in fact, the first ever medal for that country at the Olympic level, period. The PNG government awarded him with funding to attend college in Australia, where he can access better training facilities.
Posted by Penny L. Richards at 9:59 PM No comments: 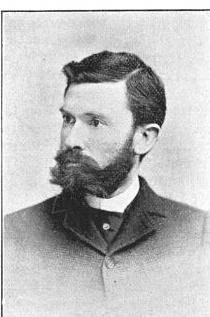 [Image description: 19c. portrait of George T. Dougherty as a young white man, with dark hair and a full beard]

Who would have dreamed one hundred years ago that this could ever be possible? Then the deaf were uneducated and widely scattered, unknown to each other; their influence, of course, was nil.
--George T. Dougherty, at the 1893 World's Congress of the Deaf, as quoted in H-Dirksen L. Bauman, Open Your Eyes: Deaf Studies Talking (University of Minnesota Press 2008): 101.

Born on this date 151 years ago, in Franklin County, Missouri, chemist George T. Dougherty. He was deaf after surviving typhoid fever at age 2. Dougherty attended the Missouri School for the Deaf, and then Gallaudet College, where he earned undergraduate and masters degrees. Dougherty's specialty was industrial chemistry, mainly working in the steel industry in Chicago. He devised processes for determining the nickel and vanadium content of steel, and the salt content of petroleum. Dougherty was one of the founders of the National Association of the Deaf, chaired the World's Congress of the Deaf in 1893 (timed to coincide with the World's Fair in Chicago that year), and was a strong supporter of state schools and rigorous academics for deaf students (he and his wife were both state school alumni).
See also:
H. G. Lang, Silence of the Spheres: The Deaf Experience in the History of Science (Westport CT: Bergin & Garvey 1994).
Fina Perez, "Curriculum Guide for Discussing Deaf Scientists," Resources for Enhancing Science and Mathematics Education of Deaf and Hard-of-Hearing Students (website).
Posted by Penny L. Richards at 12:15 PM No comments: