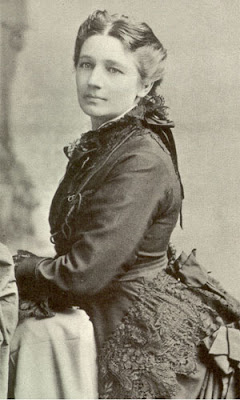 [Image description: photo portrait of Victoria Woodhull, in a lacy dark dress, head turned to the camera, torso in profile]

There have been quite a few presidential and vice-presidential candidates with children who would today be considered disabled--especially in times when many families included someone who had survived measles or high fevers or accidents of various disabling kinds. (Nineteenth-century American children grew up around open flames, sharp and grinding farm equipment, large animals, and no antibiotics, among other hazards.) Maybe because it was so common, impairment in a candidate's family wasn't generally much remarked upon in the 19th century, from what I can tell. Or maybe in the era before photo ops and newsreels and TV ads, the candidate's family just wasn't as visible during campaigns.

But when Victoria Woodhull (1838-1927) ran for president in 1872 as the candidate of the Equal Rights Party (with Frederick Douglass as her running mate), her lover Theodore Tilton included descriptions of Woodhull's teenaged son Byron when he wrote her campaign biography:

To add to her misery, she discovered that her child, begotten in drunkenness, and born in squalor, was a half idiot; predestined to be a hopeless imbecile for life; endowed with just enough intelligence to exhibit the light of reason in dim eclipse:--a sad and pitiful spectacle in his mother's house to-day, where he roams from room to room, muttering noises more sepulchral than human; a daily agony to the woman who bore him, hoping more of her burden; and heightening the pathos of the perpetual scene by the uncommon sweetness of his temper which, by winning every one's love, doubles every one's pity.'

In the context of the many (many) revelations about Woodhull that came out in 1872, and again the next year when she was on trial in connection with the Beecher-Tilton scandal, the existence of her son wasn't even a blip. And neither was the excessive horror-tinged language used in passages like the one quoted above much of an issue--it was clearly political language meant to evoke an emotional response (shock? admiration?), and it was the kind of language Woodhull herself used on the lecture circuit when describing Byron. She never hid Byron, never institutionalized him, always made sure he was well cared for, brought him along when she fled her legal problems and moved to England. But she was no friend of people with disabilities--she was, rather, an early and enthusiastic proponent of eugenics.

Woodhull's run for the presidency was clearly symbolic--generations before American women had the vote in national elections, she had no chance of winning, and to compound the impossibility she was younger than the minimum age specified in the Constitution--but it wasn't frivolous. She used the platform it offered to talk about women's rights and her views of marriage, education, and economics. She was a fascinating woman, a brilliant speaker who took outrageous positions, and enjoyed the stir she caused. And 136 years ago, she was the first woman candidate for the White House AND the first to work a son with developmental disabilities into her campaign.

[Woodhull wouldn't have a chance today either, but man, what 24-hour cable news would do with her story.... wow.]
Posted by Penny L. Richards at 8:04 PM