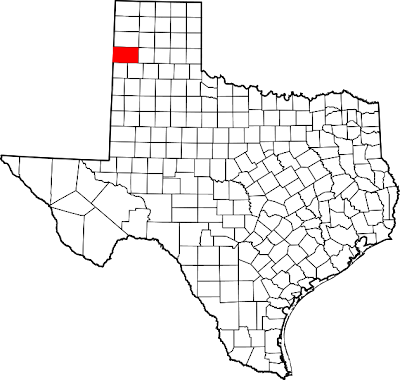 [Image description: A county map of Texas with Deaf Smith County highlighted in Red; it's a rectangular block on the New Mexico border in northern Texas]

It's not too hard to find disability-related place names (toponyms). Use Google Maps--there's Cripplegate in London, Cripple Creek in Colorado (and another Cripple Creek in Virginia), Blind Man Road in Williamsburg SC, Lunatic Creek in Montana (and another Lunatic Creek near Tenterfield, Australia), Idiotville (a ghost town) and Idiot Creek in Oregon, Asylum Township in Pennsylvania (actually, that one doesn't have anything to do with a lunatic asylum--it was named for a scheme to provide French nobles a refuge during the Revolution).

The first thing to know about Deaf Smith is that the name is pronounced DEEF Smith. Why? Because that's how its namesake Erastus "Deaf" Smith was called. Smith was born in New York State on this date in 1787. At 11 he moved to Mississippi with his parents; he lost much of his hearing as a youth, after surviving a serious illness. He was also called "El Sordo" (the deaf man) by his Spanish-speaking kin and connections. Smith was a Texas Ranger who served as a scout and a spy during the Texas Revolution. Upon Smith's death in 1837, Sam Houston wrote in a letter, "A man more brave and honest never lived." Deaf Smith County was named for him decades later.
Posted by Penny L. Richards at 2:53 PM

Thanks for sharing Deaf Smith birthday reminder with all of us, DeafRead readers.

And don't forget about Deaf Smith Canyon on the east bench of the Salt Lake City (Utah) Valley. I spent my childhood and adolescence hiking, fishing and exploring this canyon. There's even a "bat cave."