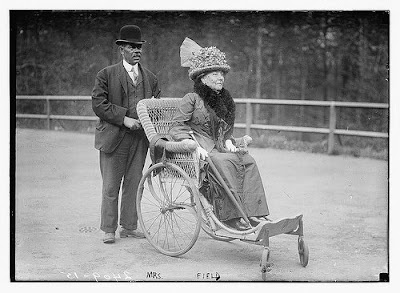 So, the photo above (from the Library of Congress uploads to Flickr Commons, from the Bain Collection of news photos taken 1910-1915) depicts Mrs. Field, obviously a well-to-do matron, in what appears to be a wicker wheeled chair, pushed along an outdoor path by an older African-American man in a suit and bowler hat.

Was Mrs. Field a wheelchair user?

Not so fast. Check out this other photo from the same collection: 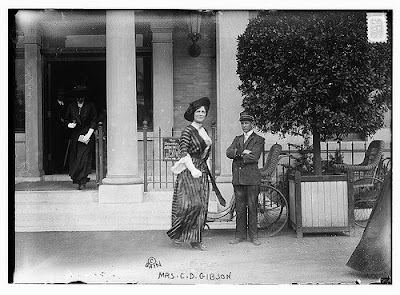 The woman hurrying past the camera is Mrs. Charles Dana Gibson (of Gibson Girl fame), but look behind her, to the right--chairs like Mrs. Field's, two of them, unoccupied, lined up, with a uniformed attendant nearby. What does the sign say behind Mrs. Gibson? "New York Zoological ...Administrative Building No Admittance" and some smaller print. The Bronx Zoo was called the New York Zoological Park at this time. So, we're at the zoo, and those chairs are apparently available (as a courtesy? as a rental?) for zoo visitors. Much like some zoos and amusement parks have available today.

Hmmm! Were the pathways at the zoo made to accommodate these conveyances? Mrs. Field obviously didn't mind being photographed on wheels during her visit--no stigma? Or, no stigma if it's perceived as a luxury rather than a necessity? Did other zoos and parks have such provisions in the 1910s? When did this trend start? What happened to these chairs? Were any smooth paths reconfigured with steps after the chairs went into disuse--in other words, did a wheelable zoo become less accessible for a time?

Would love to know more about the Bronx Zoo wheelchairs of the 1910s. Anyone?
Posted by Penny L. Richards at 1:18 PM

Interesting sleuthing. I'd like to know more about this! I wonder if there were other places that offered such conveyances. It's a very interesting notion to think that parks may have been more accessible for a time. Will you follow up on your questions and post more?

Funny you should ask, Donimo--here's a post about another image from the Flickr Commons, just ran across it today:
http://disstud.blogspot.com/2009/06/mme-gardriol-en-chaise-luchon-9-juillet.html

Very interesting and informative article. Amazing to see how inventive they were in the early 20th century.