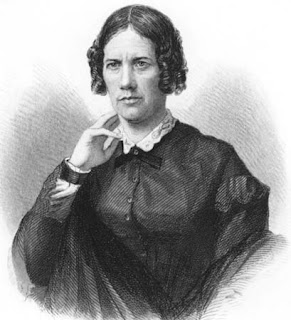 You have attempted to mold seventeen millions of human souls into one shape, and make them all do one thing.

Today marks the 201st anniversary of the birth of Frances Dana Gage, an American reformer, suffragist, and abolitionist. She was born in Ohio, married there, and raised eight children. She presided over a woman's rights convention in 1851 in Akron, where she famously introduced Sojourner Truth as a speaker (the refrain "Ain't I a Woman?" came from Gage's summary of Truth's speech that day). She toured giving lectures on woman's rights and abolition throughout the "old West." During the Civil War, she worked for the Sanitary Commission, visiting military hospitals and prisons.

In 1865, she was in a bad carriage accident and never recovered from her wounds; this was followed by a stroke in 1867. So her post-war work was more in writing and encouraging the movements she held dear. She was also a frequent contributor of fiction to the literary magazines of the day, and wrote children's books, poetry, and novels as well.

Gage was a Universalist by lifelong religious affiliation, but "Then came the war, then trouble, then paralysis, and for 14 years I have not listened to a sermon because I am too great a cripple. I have read much, thought much, and feel that life is too precious to be given to doctrines."
Posted by Penny L. Richards at 1:10 PM