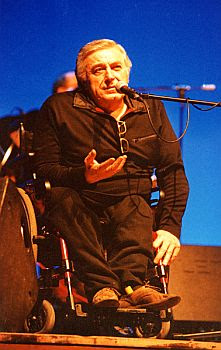 [Visual description: color photograph of a man in a wheelchair, at a microphone, wearing a black jacket, gesturing with his right hand.]

Italian singer-songwriter Pierangelo Bertoli was born on this date in 1942, in a working-class family in Modena. When he was four years old, he survived polio, and came to use a wheelchair. He taught himself to play guitar and recorded his first album in 1973. He was a popular figure in Italian music until his death in 2002. His last album, 301 guerra fa (2002), was a collaboration with his son Alberto, also a musician.

Bertoli was a political lyricist, noted for songs about the environment and peace, and worked for the removal of architectural and social barriers for disabled people in Italy. He appeared in an Italian television spot demonstrating the inaccessibility of phone booths. Wish I could find that on YouTube, but meanwhile there are plenty of performance videos of Bertoli, if you're curious.
Posted by Penny L. Richards at 12:33 PM

Anonymous said...
This comment has been removed by a blog administrator.
6:35 AM