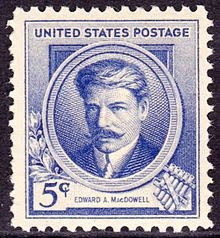 [Visual description: 1940 US Postage stamp honoring Edward MacDowell, depicted as a mustachioed white man with a sweep of thick hair, wearing a stiff collar and tie.]
Today is the 150th anniversary of American composer Edward MacDowell, born on this date in 1860 in New York City (though some sources give 1861). He showed promise as a pianist from a young age; when he was 17, his family moved to Paris so he could study at the Paris Conservatoire. He also studied in Frankfurt, and played for Liszt, and taught in Darmstadt. He became a music professor at Columbia University first chairman of the Music Department there, and was a prolific composer. In 1904, he was part of the first group of honorees named to the American Academy of Arts and Letters.
But also in 1904, at age 44, he was run over in a streetcar accident, and his injuries apparently accelerated a progressive neurological condition. He was unable to continue composing or teaching. "His mind became as that of a little child," said Lawrence Gilman, a friend. "He sat quietly, day after day, in a chair by a window, smiling patiently from time to time at those about him, turning the pages of a book of fairy tales that seemed to give him a definite pleasure, and greeting with a fugitive gleam of recognition certain of his more intimate friends." Composer Edvard Grieg ascribed the trouble to MacDowell's remarkable artistic temperament and an "unusually sympathetic and sensitive nervous system": "An artist so ideally endowed as MacDowell must ask himself: Why have I received from nature this delicately strung lyre, if I were better off without it?" (letter quoted in Gilman's biography, p. 35)
There was certainly an awareness of brain injuries at the time, and of dementia, but little was available in the way of medical intervention or rehabilitation, and there was no economic safety net for him or his wife, either. Friends held fundraisers and prominent authors and musicians signed calls for support. MacDowell's wife Marian, herself a musician, refused to consider an institution, and cared for him at home (assisted by a nurse, Anna Baetz) for the three years until he died.
In fulfillment of their shared vision, Marian founded an artists' retreat, the MacDowell Colony at her farm in New Hampshire in 1907. Marian MacDowell (d. 1956) led the Colony for twenty-five years, funding it with her lectures and performances, mainly for women's organizations. Nurse Anna Baetz (d. 1923) stayed on, long past Edward's passing, to help with the colony's day-to-day running. Today, the MacDowell Colony can claim dozens of award-winning works of art that were written or begun at the Edward and Marian's farm.
Posted by Penny L. Richards at 1:24 PM