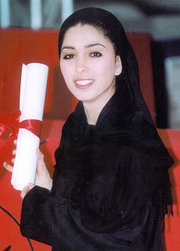 Today is the 26th birthday of Iranian filmmaker Samira Makhmalbaf. In 1998, she was the youngest film director included in the official section at the Cannes Film Festival, for her semi-documentary Sib (The Apple, 1997), about disabled twin sisters, Massoumeh and Zahra, whose father has never let them leave the family home in Tehran, saying "My daughters are like flowers, they may wither in the sun." The neighbors finally alert authorities about this treatment after eleven years, and the girls are rescued, literally from behind bars. I haven't seen Sib, but it sounds like a film worth knowing more about. Makhmalbaf has gone on to direct several more films, and won the Jury Prize at Cannes in 2000 for her second film, Blackboards, about itinerant teachers in Kurdistan.
Posted by Penny L. Richards at 12:29 PM