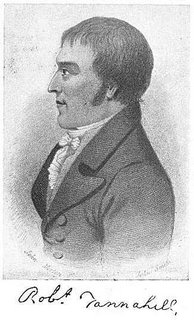 Scottish poet Robert Tannahill was born on June 3, 1774. He was known to be sensitive most of his life, with a melancholy that would now probably be labeled depression. Here's how David Semple described Tannahill's state of mind in an 1875 edition of his works:

The Poet, it will be observed from our preceding remarks, was sinking under constitutional disease, and the symptoms of aberration of mind were developing. His mental strength had been overworked, and his mind, like a musical chord brought to its fullest tension, was ready to snap. His fine feelings were overcome by unjust criticism, and the sensibility of his nature overwhelmed with captious remarks. Both diseases were rapidly increasing, and his reason hung like the beam trembling in the balance. His relations observed the progress of the physical disease, but they were loth to believe he was suffering from a disorder the most calamitous that can afflict the human race.

The "constitutional disease" mentioned here was tuberculosis, which had already taken the lives of his father, his sister, and three of his brothers. Just before he turned 36, Tannahill slipped from his family's house in the night, and drowned himself in the Paisley Canal. Few of his unpublished poems survive--he burned the manuscripts shortly before his death, after a publisher rejected his work. The Complete Tannahill is an online archive of his verse.
Posted by Penny L. Richards at 9:04 PM