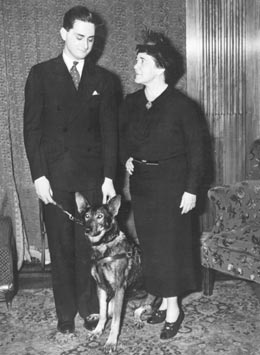 Today is the 120th anniversary of the birth of Dorothy Harrison Eustis, born this date in 1886 into a prominent Philadelphia family. Both of her husbands were interested in animal breeding--her first husband experimented with breeding cows for increased milk production, and she ran a dog breeding program in Switzerland with her second husband, selecting for intelligence to train dogs for police, military, border patrol, and similar purposes. Dorothy Eustis learned about German dog training programs to train guides for blind WWI veterans. She wrote about the approach for the Saturday Evening Post in 1927, saying:

The future for all blind men can be the same, however blinded. No longer dependent on a member of the family, a friend or a paid attendant, the blind can once more take up their normal lives as nearly as possible where they left them off, and each can begin or go back to a wage-earning occupation, secure in the knowledge that he can get to and from his work safely and without cost; that crowds and traffic have no longer any terrors for him and that his evenings can be spent among friends without responsibility or burden to them; and last, but far from least, that long, healthful walks are now possible to exercise off the unhealthy fat of inactivity and so keep the body strong and fit. Gentlemen, again without reservation, I give you the shepherd dog.

Morris Frank, a young American insurance salesman who was blind, contacted Eustis after the article appeared, and proposed that they join forces to start a similar school in the US. From their alliance, the Seeing Eye organization was founded. Eustis trained "Buddy" as Frank's guide dog (Frank, Buddy, and Eustis are pictured at left). By the time Eustis retired from the presidency of Seeing Eye in 1940, the program had trained and placed more than a thousand dogs for guide work. (The organization still trains and places nearly 300 dogs a year.) There was a television movie made by Disney that tells a version of the Frank and Eustis story, titled Love Leads the Way (1984), based on a book by Morris Frank.
Posted by Penny L. Richards at 1:00 PM