Last Thursday, California state senator Sheila Kuehl was interviewed on the radio (the audio is here) about SB1437, "School Instruction: Prohibition of Discriminatory Content," a controversial state bill that would add "sexual orientation" to the list of identity categories to be presented without discrimination in school textbooks. The revised language would read:

No textbook or other instructional materials shall be adopted by the state board or by any governing board for use in the public schools that contains any matter reflecting adversely upon persons because of their race or ethnicity, gender, disability, nationality, sexual orientation, or religion.

Kuehl (once known for her portrayal of Zelda Gilroy on "The Many Loves of Dobie Gillis") was one of the first women admitted to Harvard Law School, and is the first openly gay or lesbian person elected to the California legislature. She notes that if textbooks are "silent about the diversity of talented people who were important in California, the impression is that only white, straight men did anything important. That leaves virtually everyone else in school believing their talents may not be sufficient." 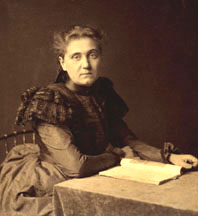 Maybe make that white, straight, able men? The disability clause is already part of the current law, and has been since 1987. Has it been enforced? I'm curious if it's ever had an impact. Under the new version (if passed), will California high school students in American history courses get to know that (for example) Hull House founder and Nobel Peace Prize winner Jane Addams (left, 1860-1935) was both lesbian and disabled (from spinal tuberculosis as a young child), and maybe talk about what it meant that she often had to conceal both these central elements of her life? How both might have shaped her work?

Anonymous said...
This comment has been removed by a blog administrator.
10:15 PM

Anonymous said...
This comment has been removed by a blog administrator.
2:37 AM

Anonymous said...
This comment has been removed by a blog administrator.
12:29 AM

Anonymous said...
This comment has been removed by a blog administrator.
9:32 AM

Anonymous said...
This comment has been removed by a blog administrator.
9:05 AM