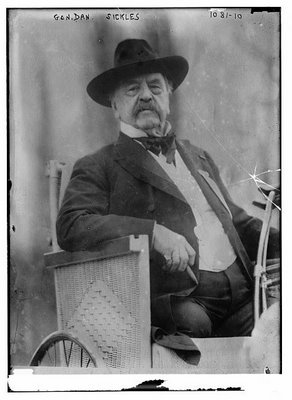 What's the Bain Collection, you may wonder...well, thanks to the Magpie, I now know that it's about 1600 images from a collection of 42,000 glass negatives, mostly American news photos from the early 20th century. Why is this so cool? Well, click on over to the search page. Don't bother typing in "disability" or "disabled"--those words won't bring up anything. But typing in "blind" or "cripple" will bring up loads of photographs, many of them taken at schools and rehabilitation or vocational training programs. Among the more striking images, there are deaf girls dancing, blind veterans learning to play checkers, one-legged races (where at least one competitor chose to run in full business attire), amputees boxing (a very posed shot, since both men are smiling), and General Daniel Sickles in his wicker wheelchair, shown here at right.

Who was he? I was wondering the same thing. Daniel Sickles (1819-1914) was a Union general in the Civil War. Before the war, he was a lawyer in New York City, and a US Congressman; in 1859, while he was a member of Congress, he killed his wife's lover, but was acquitted of the crime, in what is remembered as "the first use of the insanity defense in US history." Though he had no military experience, he was a successful recruiter for the Union Army, and was made a general in 1861. At the Battle of Gettysburg, he lost his leg to a cannonball injury. He had his shattered legbone preserved and donated to the Army Medical Museum, where he is rumored to have visited it annually.

After the war, using a wheelchair (or crutches), Sickles served in various government posts, including another term in Congress (1893-95), and a stint as US Minister to Spain (1869-1873). Sickles lived to the age of 94. The massive funeral procession of Daniel Sickles is also captured in photographs at the Bain Collection.
Posted by Penny L. Richards at 7:23 PM

thanks for leaving the url for this post when you commented at magpie. you mined the bain collection for very different stuff than i did, and the photos you've found are fascinating. i probably would never have seen most of them were it not for you.