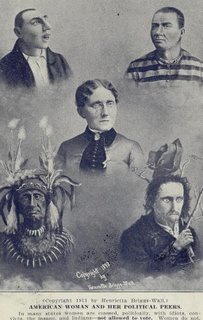 [A May 1 post in observance of Blogging against Disablism Day, organized by the Goldfish. Go check Diary of a Goldfish for links to over a hundred other blogs posting today on the topic of disablism.--PLR]

It's no secret that the suffrage movement was ugly on the subject of disability. Women, it argued, were clearly better qualified to vote than many categories of men, including men with disabilities. (Where were the women with disabilities in this reasoning? Worthy of suffrage, or no?) Here's Elizabeth Cady Stanton's version of the common refrain, from a speech to the National Woman Suffrage Convention in 1869:

...women of wealth and education, who pay taxes and obey the laws, who in morals and intellect are the peers of their proudest rulers, are thrust outside the pale of political consideration with minors, paupers, lunatics, traitors, idiots, with those guilty of bribery, larceny, and infamous crimes.

Historian Douglas Baynton has pointed out this theme in suffrage literature too, describing images such as the one reproduced here at left (which came in many versions):

A second powerful and recurrent rhetorical device for suffragists was to charge that women were wrongly categorized with those legitimately excluded from public life. A popular theme in both British and American suffrage posters was to depict a thoughtful-looking woman, perhaps wearing the gown of a college graduate, surrounded by the slope-browed, wild-eyed, or 'degenerate' men identified implicitly or explicitly as 'idiots' and 'lunatics.' The caption might read 'Women and her Political Peers,' or 'It's time I get out of this place, where shall I find the key?'

I'd like to think we do better now (at least some of the categories depicted in the poster as "legitimate" exclusions from suffrage are now voters, for example). There is a growing literature in feminist disability studies, but in mainstream women's studies and women's history contexts, being in the margins would be a step forward--disability is still, too often, completely invisible, while race, sexuality, ethnicity, and class get full treatment.

Here's an example: Through Women's Eyes: An American History with Documents, by Ellen Carol DuBois and Lynn Dumenil (Bedford St. Martins 2005), is a fat textbook meant for undergraduate US history courses--nearly 700 pages, in fact, with a clear and widely praised effort to cover US history in all its diversity. What could be too trivial for 700 pages? Hmm, no "disability" in the index. Okay, well maybe...nope, no "blind" or "deaf," either. But surely....no, Helen Keller doesn't make the cut. Asylum reformer Dorothea Dix is mentioned, but only for her work organizing nurses during the Civil War. "Eugenics," that's gotta be...no, that's not in the index either. There are many, many illustrations in this book, but if there's a single wheelchair or crutch depicted, I haven't found it yet. Which leaves me with two questions:

1. Why not address the disablism in the suffrage movement? Surely we're beyond believing that ignoring the uncomfortable truths is the best way to teach history. There are other missing stories, too: where are the women in the disability rights movement, or Carrie Buck and other women who were sterilized under eugenics laws, or, or, or, or, or.... ? These are interesting stories--important, illuminating stories.

2. Where are the women with disabilities in this and other textbooks? Among the strengths of this text, the publisher touts, "a balanced perspective that reveals the diversity of American women." Or maybe this example of a "balanced perspective" reveals something else.
Posted by Penny L. Richards at 12:00 AM

Noticed you have a list of disability-related blogs. I've been to the 19th floor. Very good blog. Well written and easy to relate to. If you'll take a suggestion, here's one: http://disabilityrants.blogspot.com/

The reading is compelling, poignant, and personal.

Thanks Disability Blogger - would be happy to feature you in our blogroll. Mike

Thanks Mike. But disabilityrants is not my blog, just one I came across. My own blog is at http://www.disabilityblogger.blogspot.com (I'm a former disability claims examiner for social security and also a former caseworker for medicaid based on disability)