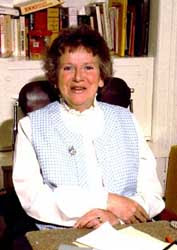 [Visual description: Margaret Blackwood, seated at a desk, in a blue checked vest and white blouse, in front of a shelf of books.]

"I spoke to more MPs. I shouted at them at their election meetings. 'You haven’t mentioned the disabled! Are we a dirty word?' I broadcast on the radio and on TV. I wrote to every newspaper I’d heard of. The time was ripe. Hundreds of people were getting in touch with me. When at school, I had been so timid I used to tremble when I read at prayers and begged to be excused. Now there was no stopping me. I was passionate."

The founder of Scotland's Disablement Income Group (DIG-Scotland), Margaret Blackwood was born on this date in 1924, in Dundee. She was diagnosed with muscular dystrophy in her early teens, with discouraging prospects. She finished school in 1943, but found few job opportunities. "I sank into despair," she recalled.

When she was in her early 40s, she learned about the DIG founded by and for disabled people in Surrey in 1965. Soon Blackwood began a similar effort in Scotland, and, as she describes in the quote above, became a "warrior in a wheelchair." In 1978 she married fellow disability rights activist Charles McGrath, while he was in an intensive care unit. Charles died two weeks later.

Today, the Margaret Blackwood Housing Association, based in Dundee and named in her honor, manages accessible and affordable housing for disabled tenants all over Scotland.

[Thanks again to Iain Hutchison for giving me the delicious Biographical Dictionary of Scottish Women, where I first learned of Margaret Blackwood McGrath.]
Posted by Penny L. Richards at 10:00 AM