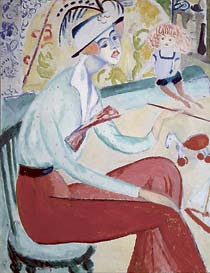 [Image description: A self-portrait by Sigrid Hjertén, showing herself painting, seated, in a plumed hat, with a pale-green top, bowtie, black belt, and red trousers; a child --presumably her son Ivan-- and his toy are nearby in the background.]

Born on this date in 1885, in Sundsvall, Swedish painter Sigrid Hjertén. Today she's recognized as a major figure in Scandinavian expressionism. She studied with Matisse; she married a fellow artist, Isaac Grünewald; she designed tapestries and ceramics. She had a solo exhibition at the Royal Swedish Academy of Arts in 1936, which was well-received.

By 1938, she was in her fifties, divorced, and experiencing mental illness. She had been hospitalized with symptoms of schizophrenia (as it was assessed in her time) as early as 1932; she would spend her last ten years in a Stockholm hospital, until she died from excessive bleeding during a botched surgical lobotomy in 1948.
Posted by Penny L. Richards at 3:22 PM