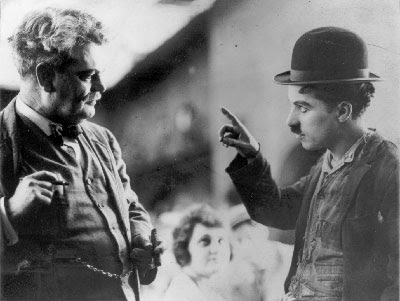 [Image description: black-and-white photo of two men, facing each other; on the left, artist Granville Redmond; on the right, actor Charlie Chaplin in his trademark costume; Chaplin appears to be signing to Redmond. Redmond has a pen in one hand and a cigar in the other. Found here.]

Well, a Temple U. blog should certainly take note of a prominent deaf Philadelphian's birthday, no?

Granville Redmond was born on this date in 1871, in Philadelphia. He became deaf after surviving scarlet fever when he was a very small child. Perhaps in recognition of young Granville's educational needs, his parents moved the family to San Jose, California, so the boy could attend the Berkeley School for the Deaf.

Granville Redmond was a student at the Berkeley school for eleven years (1879-1890). He was found to be a gifted artist and encouraged to develop his talents at the school. After graduating, he attended the California School of Design in San Francisco, where he was an award-winning student. From 1893 to 1898, Redmond worked and studied in Paris. When he returned to the US, he went to paint beach scenes near Los Angeles, and married a deaf woman, Carrie Ann Jean. They had three children together. Redmond gained a solid reputation as California's first resident Impressionist painter.

So what's with the photo above? Well, Redmond and Charlie Chaplin became friends in Los Angeles (a much smaller town then, of course). Chaplin, being a silent film star, was always interested in visual communication, and wanted Redmond to help him learn how ASL worked--which seems to be what's happening in the photo above. Chaplin also supported Redmond's artistic career--he set up a studio for Redmond on the film set, he bought Redmond's paintings, and he invited Redmond to appear in a few silent films, including the 1931 Chaplin classic City Lights (Redmond plays a sculptor). The Redmond/Chaplin friendship is also mentioned in Martin F. Norden's The Cinema of Isolation: A History of Physical Disability in the Movies (Rutgers UP 1994): 70-71.

Interested readers can go see works by Redmond--mostly landscapes and seascapes--at the Irvine Museum, the Laguna Art Museum, and the Los Angeles County Museum of Art, among other collections.
Posted by Penny L. Richards at 12:01 AM

Granville Redmond's public artwork was only the existing stuff survived the Great San Fransciso Earthquake of 1906 as everything in SF all gone!

Robert, you were thinking of Douglas Tilden, the deaf scupltor, also friend of Granville.

Fire do burn paintings but not bronze sculptures.

Hello,
I'm a special education teacher in South Philly. I'm also a grad student at Arcadia. I ran across your blog and would like to ask you a few questions about society's attitude towards people with disabilities. It is for a portfolio project for my grad class. If you can help me out, you can email me at amarkelz@arcadia.edu

You can see a clip of Granville acting with Charlie Chaplin at: