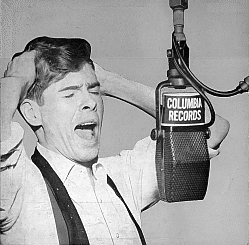 [visual description: Singer Johnnie Ray in front of a large microphone with the words "Columbia Records" on it; Ray has his eyes closed, his mouth open, and his hands on his head, in a pose that seems meant to convey absorption in his singing.]

Born on this date in 1927 was John Alvin "Johnnie" Ray, an American singer popular in the 1950s. Ray was born and raised in Oregon. As a boy, Ray was participating in a "blanket toss" activity at a Boy Scout Jamboree when his right eardrum was damaged and he became deaf on that side. He lost more hearing during a surgery in 1958. (Some biographies say that Ray had some hearing loss before the jamboree event, as well.)

Ray performed wearing a visible hearing aid (check out this video for example, which begins with Ray facing away from the camera, with the back of his right ear in the spotlight); it can be seen in some publicity stills, but in others it is not included. Road manager Tad Mann attributed the singer's distinctive sound and highly animated performance style to his concern for pronouncing words clearly and communicating through facial expressions and body language.

While Ray was "out" about being a deaf man, he struggled in an era when homosexuality was criminalized. He was arrested, tried, and fined several times in the 1950s for minor incidents related to his sexuality. He experienced alcoholism and drug addiction for decades, and died from liver failure in 1990.