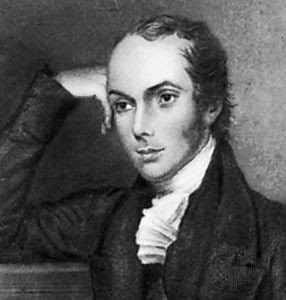 [Image description: engraved head-and-shoulders portrait of Thomas Pringle as a young man, balding, with long sideburns and a high-collared white shirt, head resting on one hand.]

Scottish poet, editor, and abolitionist Thomas Pringle was born on this date in 1789, on a farm in Blaiklaw, Roxburghshire. As a baby, his hip became dislocated, and the dislocation went untreated; Pringle used crutches throughout his life thereafter. From his memoirs:

"My early reminiscences reach back to a period when I must have been about three years old, or little more. I remember of being carried to Kelso when about that age, and being tormented by doctors examining my limb, and making me wear a red morocco boot, with steel bandages to keep it in some prescribed position. These appliances were of no advantage, and were, ere long, superseded by a pair of crutches. The latter I soon learned to use with such ease and adroitness that, during my boyhood and youth (when I generally enjoyed robust health), I felt but little incommoded by my lameness."

Pringle's later adventures included a six-year stint as a librarian in South Africa, where he was an early publisher of English-language news and literary publications. His work in publishing and abolition led to his role as the recorder of Mary Prince's narrative, which was published in 1831. Pringle died three years later, from pneumonia, age 49.
Posted by Penny L. Richards at 5:11 PM