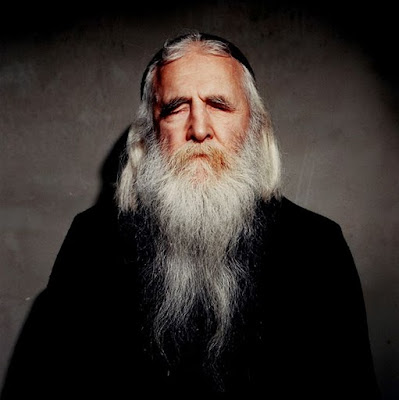 [above: Portrait of Moondog later in life, with long white beard]

I wondered how, as a blind man, he managed to cross the street without an instant of hesitation until he showed me how he listened to traffic lights; I had never heard them before in this way.

--Philip Glass, on fellow composer Moondog; from his introduction to Robert Scotto, Moondog: The Viking of Sixth Avenue (Process 2007).

Born on this date in 1916, street poet and composer Moondog, aka Louis Thomas Hardin. He knew he was a drummer from an early age, starting with cardboard boxes as a little boy, and drumming in the high school band. Young Louis became blind after a farm explosion at age 16; he left his local high school and studied music and composition at the Iowa School for the Blind. He learned to read braille, and devoured books on music theory; he moved to New York City in 1943.

Within a few years of his arrival in New York City, he took the name "Moondog," and was performing his own compositions on the street, often in a Viking costume of his own devising. He was influenced by the jazz scene, and by city sounds. Moondog created his own instruments to make the sounds he wanted to hear: an Oo and a Trimba, among the most notable inventions. ""Performing in doorways was the only way to present my music to the public, but for playing on the streets I needed drums down close to the ground, so I used to design my own instruments and had a cabinet- maker put them together," he explained. Much of his music was recorded, including a 1957 children's album featuring vocals by Julie Andrews.

In 1974 he moved to Germany, and lived there the rest of his life, composing, recording and touring. A German woman, Ilona Sommer, transcribed his braille notation and otherwise assisted him. After Moondog's death in 1999, Sommer became the administrator of his estate. Samples of his compositions turn up in popular recordings today, most recently a snippet of his "Bird's Lament" in Mr. Scruff's "Get a Move On." And there are quite a number of Moondog recordings to be found on YouTube; here's one for example:

[Description: There are no moving visuals here, just a photograph of an album cover called "More Moondog," which features a closeup of his bearded face, eyes closed.]
Posted by Penny L. Richards at 1:06 PM