I'm just a tough old woman. They can't be rude to me. I have all this white hair. I take advantage of every thing I can — age, hair, disability — because my cause is just.
--Marjory Stoneman Douglas, in a 1983 interview 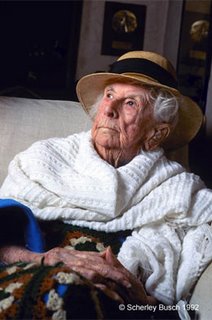 "Grandmother of the Everglades" Marjory Stoneman Douglas (pictured at left) was born this date in 1890. She lived to the age of 108, and was active to the end: she left an unfinished book when she died in 1998. She was 103 when Bill Clinton named her to receive a Presidential Medal of Freedom. Marjory Stoneman Douglas's story put me in mind of the fictional eighty-plus women characters I've run into lately:

*Leonora Carrington's surreal novel The Hearing Trumpet (1974) begins with Marian, a 92-year-old living with her son and his family. She wonders if she'll have a chance to go back to London and visit her 110-year-old mother, who is described as "very spry in her wheelchair." Marian's friend Carmella gives her the hearing trumpet of the title, which is "exceptionally pretty, being encrusted with silver and mother o' pearl motifs and grandly curved like a buffalo's horn."

*Iris Chase Griffen, the Canadian narrator of Margaret Atwood's The Blind Assassin (2000), is "only" in her eighties, and identifies has having several disabilities related to her hearing and mobility. The people around Iris dismiss her as ineffectual, blameless, but in fact she has a wealth of secrets and strong opinions. She explains the mental map she's developed for herself:

In the course of my walks I've been compiling a map in my head of all the easily accessible washrooms in Port Ticonderoga--so useful if you're caught short--and the one in the doughnut shop is my current favourite.

I like finding examples, biographical or fictional, of very old women with disabilities who don't fit the stereotypes--they're not miserable, they're not idle, they're not cute or sweet--they're thinking, they're active, they're... tough, like Marjory Stoneman Douglas.
Posted by Penny L. Richards at 2:57 PM

You've helped reduce the invisibility of the aging woman.

Thanks Sue! (Are we related? :) ) Today's the 97th birthday of another great example: Italian Nobel-prize-winning medical researcher Rita Levi-Montalcini, who has in recent years been a visible ambassador for the UN's hunger-relief programs, and started a scholarship fund for Ethiopian women.