Teaching the Madness(?) of Margery Kempe 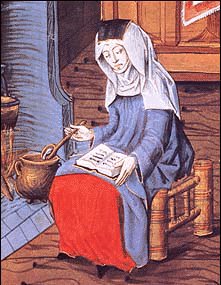 Bardiac's recent REALLY Dead Women Writers meme asked bloggers to contribute five women writers dead before 1800 (more or less). Englishwoman Margery Kempe (d. 1438) was one of the first pre-1700 writers to make the list, and it's easy to see why--after centuries of obscurity, The Book of Margery Kempe is now widely taught as a first-hand account of a woman's everyday life and spirituality in medieval Europe. (Kempe was illiterate; she dictated her memoirs, prayers, and stories.) Kempe's mystical visions and exhibitionist ecstasies bring many modern readers to assume she had some kind of mental illness, though of course the distance between 2006 and the 1400s must account for much of the strangeness in her report.

This week, Dr. Virago at Quod She has a long post up, "Calling Margery Kempe Crazy--and Why it Matters," about teaching Margery Kempe through students' dismissal of her as "crazy," "freak," or the very least "unstable." Dr. Virago's solution to the students' distraction is to say something like this: "If you find Margery annoying and weird, you give her authority as a martyr. If you find her holy and sincere, you give her authority. Either way, the text constructs the readers it wants and that authorize its existence and meaning. Only if you are utterly indifferent are you misreading the text."

For more on the subject of Margery Kempe's "madness," see:

And on the general topic of medieval mysticism and madness, see: