There are two new books on disability history out just this month to note. 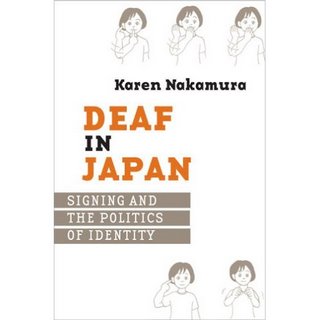 Karen Nakamura's Deaf in Japan: Signing and the Politics of Identity (Cornell University Press 2006), starts from the first Japanese schools for the deaf in the 1870s, and relies on both archival and ethnographic research to reveal recent shifts in attitudes, both toward and within the deaf community. Karen Nakamura is an anthropology professor at Yale.

Mark Berton's Dixmont State Hospital (Images of America, Arcadia Publishing, 2006) is a photographic record of the title institution, an asylum on the Ohio River outside Pittsburgh; built in 1859 (and named for Dorothea Dix), it closed in 1984 and the building was razed earlier this year. Berton is a Pittsburgh-based newspaper photographer who "spends his free time photographing asylum architecture."

[Dixmont was apparently a popular site for photographers; Rowdydow has a webpage featuring images from inside its ruins, and Dixmont.info has video and many more stills. The pictures of Dixmont at the Hours of Darkness gallery give you some flavor of the place's style and state before its demolition.]
Posted by Penny L. Richards at 11:30 AM

Carol Marfisi said...
This comment has been removed by a blog administrator.
2:52 PM

The official companion site to the Dixmont State Hospital book is www.dixmontstate.com

I've been trying to post staff newsletters, maps etc. all relating to Dixmont.

Thanks for the mention!

Have you seen the book, "Ode to Diet Coke: Disability, Choices and Control, by Barbara Linn? available at www.jimsaminc.com.

The memoir of a disability rights leader who confronts the health care system. Mixing horror and humor, it is a compelling read.