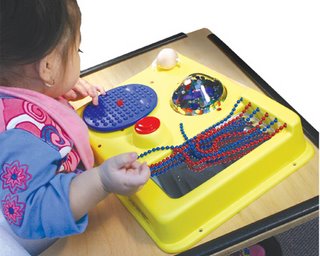 Electronic devices, such as cell phones and iPods, however, will likely draw increased scrutiny.

--MSNBC's Rob Lovitt, on the new screening in airports this week

I can probably fly coast-to-coast without my iPod, somehow. I think I can even fly without my laptop. But my eleven-year-old son can only rarely go six waking hours in any situation without this toy, an activity center from Enabling Devices (that's the online catalog photo at right). The wooden ball is pulled to play soft music. The big blue button vibrates and lights up. The red button buzzes and makes the sequins in the bubble spin. The chains in front of the mirror are also a sensory thing. The whole box is fairly heavy, full of batteries, and costs a fortune. We replace it at least once a year because it gets such a workout in our house. Believe me, if there were a lower-tech, cheaper, simpler alternative that worked, we'd be using that. There isn't, for Jake and his needs. (At least, nothing that doesn't also vibrate and buzz and light up.)

A heavy box covered in buttons, that only seems to buzz and vibrate.... would that draw increased scrutiny, do you think? It has in the past, but we've never flown too close after a sudden uptick in security before. Never fear, say the travel experts:

"To entertain young children, bring a deck of cards, and paper and
pencil. 'You can draw pictures, make designs, play Hangman,' Ogintz
said. Play 'I Spy' on a long line or if you are forced to check the toy
bag, she added."

Oh, yeah, playing 'I Spy' will be a sufficient diversion for six hours. Except, um, the spying thing (Jake's vision isn't so great), and the naming and describing part, I guess (he's nonverbal). Then there's his adaptive stroller, and his bag full of formula, and liquid seizure meds, and and and.... and now I'm thinking...

For more detailed discussion of problems with the new restrictions for disabled travelers, go read Blue Lily on Echidne of the Snakes and Gimp Parade (it's crossposted, but the former link has more comments).

UPDATE (12 August): Joel Smith describes his own concerns about traveling through Heathrow without an assistive device at NTs are Weird.
Posted by Penny L. Richards at 3:08 PM