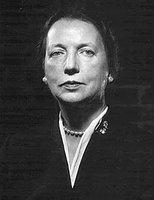 American poet Louise Bogan was born on 11 August 1897, in a mill town in Maine. She reviewed poetry for the New Yorker for almost thirty years; and she experienced depression throughout her life, times she described as "tearless sorrow." She was (voluntarily) committed for psychiatric hospitalization more than once in the 1930s.

Here's a poem by Bogan (copied from here):

Evening in the Sanitarium

The free evening fades, outside the windows fastened with decorative iron grilles.
The lamps are lighted; the shades drawn; the nurses are watching a little.
It is the hour of the complicated knitting on the safe bone needles;
of the games of anagrams and bridge;
The deadly game of chess; the book held up like a mask.

The period of the wildest weeping, the fiercest delusion, is over.
The women rest their tired half-healed hearts; they are almost well.
Some of them will stay almost well always: the blunt-faced woman whose thinking dissolved
Under academic discipline; the manic-depressive girl
Now leveling off; one paranoiac afflicted with jealousy.
Another with persecution. Some alleviation has been possible.

O fortunate bride, who never again will become elated after childbirth!
O lucky older wife, who has been cured of feeling unwanted!
To the suburban railway station you will return, return,
To meet forever Jim home on the 5:35.
You will be again as normal and selfish and heartless as anybody else.

There is life left: the piano says it with its octave smile.
The soft carpets pad the thump and splinter of the suicide to be.
Everything will be splendid: the grandmother will not drink habitually.
The fruit salad will bloom on the plate like a bouquet
And the garden produce the blue-ribbon aquilegia.

The cats will be glad; the fathers feel justified; the mothers relieved.
The sons and husbands will no longer need to pay the bills.
Childhoods will be put away, the obscene nightmare abated.

At the ends of the corridors the baths are running.
Mrs. C. again feels the shadow of the obsessive idea.
Miss R. looks at the mantel-piece, which must mean something.