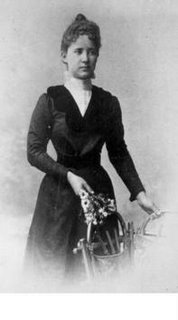 Today marks the 130th anniversary of the birth of Croatian painter Slava Raskaj (shown at left), born on this date in 1877, in Ozalj. She was deaf from infancy, and at age 7, she was sent to live at a school for the deaf in Vienna. At fifteen, she left the school with some art training, studied further in Zagreb, and pursued a career as a watercolorist, finding some success with her striking landscapes, portraits, and still lifes. However, in about 1900 those around her began to see increasing evidence of mental instability, and in 1902 she was again institutionalized, this time for insanity. She died in a Zagreb mental hospital in 1906, at the age of 29. 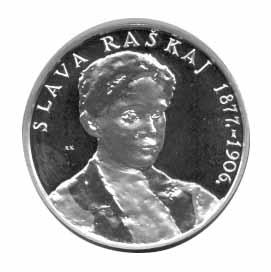 has since been remembered with her image on a Croatian commemorative coin (at right); and on film, first in a 1993 short documentary, and then in a 2004 feature film, titled 100 Minutes of Glory in English. A school in Zagreb that focuses on deaf education and speech/language therapies, is named Centre Slava Raskaj for her.
Posted by Penny L. Richards at 12:33 AM