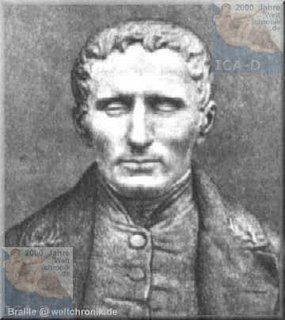 Today marks the birthday of Louis Braille (left; his bicentennial is just two years from now), developer of the eponymous braille system. If you know what an "awl" is, and you don't work leather or crossword puzzles, it might be because (like me) you read a biography of Braille in your childhood. It's hard to forget the story: three-year-old Louis became blind after he was struck by a stitching awl in his father's saddle-and-harness shop. He attended Paris's Royal Institute for Blind Youth from the age of 10, where he became a talented musician.

The six-dot braille system was based in part on a twelve-dot "night writing," an invention intended for military use that never quite caught on. Braille's code can be used as notation for any written language, and has also been applied to music and mathematics. Braille himself published a method of writing music with the raised-dot system, and helped invent a mechanical device for producing braille text.

Louis Braille didn't live to know his system would be widely embraced; he died in 1852, at the age of 43, from tuberculosis; his remains were buried in the Panthéon in 1952. Wonder what he would have made of braille jewelry. And one more tidbit: There is an asteroid named for Braille.
Posted by Penny L. Richards at 1:10 PM

the weirdly ironic thing is that when you write braille by hand, you may do it using a template and a punch thing very like an awl. i have used this method a few times and i am not at all sure what it's called but maybe someone more knowledgeable can comment it.

it's called using a slate and stylus. slate is the metal template part and stylus is the awl-ish part.

check out this online smorgasbord slate and stylus info and photos:
http://www.brailleslates.org/

here's a bit of history of tactile codes, with photos of modern braille writing devices:
http://www.tsbvi.edu/Outreach/seehear/spring06/history.htm

Anonymous said...
This comment has been removed by a blog administrator.
7:29 AM