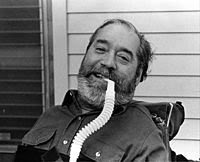 I'm tired of well meaning noncripples with their stereotypes of what I can and cannot do directing my life and my future. I want cripples to direct their own programs and to be able to train other cripples to direct new programs. This is the start of something big -- cripple power.

On this date in 1939, Edward Verne "Ed" Roberts was born, one of four sons raised by Zona and Verne Roberts of Burlingame, CA. He was fourteen when his whole family contracted polio in 1953. He finished high school only when his mother persuaded the district to waive requirements like physical education and a driver's license. Then he set his sights on college: Berkeley.

He had to sue the state Department of Vocational Rehabilitation, and he encountered significant resistance at Berkeley, where a dean declared, "We've tried cripples before and it didn't work." Eventually, he was admitted as an "experiment" in 1962, and settled into the student infirmary, which was the only building where he could live with his iron lung. Other quadriplegic students soon followed, also housed in the infirmary--and the independent living movement began to brew. In the 1960s, there were no curbcuts on campus--these students (the "Rolling Quads") had to lobby for them, and for a disabled students program on campus.

Ed Roberts earned a BA and an MA from UC Berkeley, in political science. (He began doctoral studies in the same department, too.) He became known as the "Father of the Independent Living Movement," founded the Berkeley Center for Independent Living (1972), and was later appointed state director of the Department of Vocational Rehabilitation (the agency he once had to sue). He also helped establish the World Institute on Disability in Oakland, in 1984--the same year he won a MacArthur Foundation "genius" fellowship for his vision and leadership. "I've always figured it took no more energy to dream big dreams as little ones," he explained.

After a Washington DC memorial service held for Roberts in 1995, Ed's chair was donated to the Smithsonian Institution, where it remains in the National Museum of American History, as part of a growing collection related to the US history of disability and disability rights.
Posted by Penny L. Richards at 1:46 PM