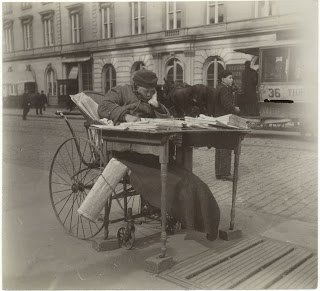 Alice Austen (1866-1952) was a prolific amateur photographer of New York's Gilded Age. She made thousands of photographs, images of ships and automobiles, bootblacks and policemen, beachgoers and organ grinders, cyclists and postmen. The image above (click it to enlarge) is an Alice Austen photograph found in the New York Public Library's online galleries. It shows a woman selling newspapers on the streets of New York. She's bundled up, in a hat and coat and a long blanket covering her legs and feet; and she's in a wheelchair with very thin rear wheels, much like an old-style bicycle. Notice that the legs of the table in front of her have been raised up on bricks to fit her chair under it. In the background, there's a horse-drawn trolley, and behind that a bank building. Is she reading, or sleeping, with her cheek resting in her hand? According to the website, this photo was taken in 1896. 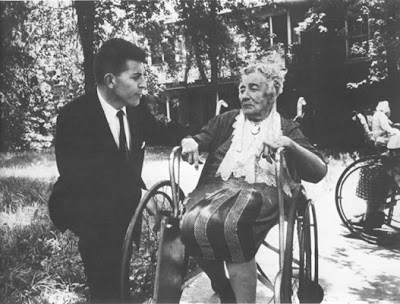 Much later in her life, photographer Alice Austen herself used a wheelchair, after arthritis affected her mobility. The image at right is Austen at the Staten Island Farm Colony, a public poorhouse where she lived, 1950-1951; the man in the photograph, Oliver Jensen (1914-2005), was a Life magazine staffer and small-press editor who helped rediscover Austen's glass-plate negatives in the Staten Island Historical Society. He published some of her photos and sold others to major magazines to raise money to get her out of the poorhouse and into a private nursing home for the last months of her life.
Posted by Penny L. Richards at 1:47 PM