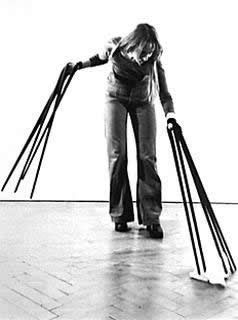 There were a couple birthdays I might have marked here this weekend if I wasn't otherwise occupied-- but I want to post a quick note anyway, with images:

Rebecca Horn (b. 24 March 1944) is a contemporary German performance artist, and filmmaker. In the mid-1960s, she was living in Barcelona and working on fiberglass sculptures; working with fiberglass without a mask landed her with a serious lung disease, and she was hospitalized for a year for treatment and recovery. During her time in the sanatorium, she drew, and sewed, and tried to create objects that would extend her body from the hospital bed. The image at left shows her "Finger Gloves," a 1972 performance piece in which she wore long balsa extensions on her fingers, an example of her body-extension creations, which play with ideas of touch, sensation, protection, and imperfection. 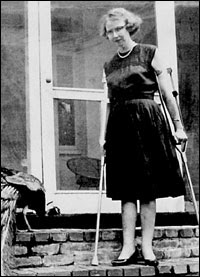 American writer Flannery O'Connor (25 March 1925-3 August 1964) inherited systemic lupus from her father. In her two novels and 31 short stories, there are running themes of disability, pain, violence, monstrosity, religion, and an unsentimental, often gothic dark humor that is charactistic both of Southern literature and of the era, but may also reflect her personal experience of chronic pain and illness. O'Connor began using crutches in the 1950s (as shown in the image at right), because the powerful medications she took to manage her pain weakened her bones. She said, of writing through chronic illness, "I have enough energy to write with and as that is all I have any business doing anyhow, I can with one eye squinted take it all as a blessing. What you have to measure out, you come to observe more closely, or so I tell myself."
Posted by Penny L. Richards at 1:15 PM