From the press release posted on H-Eugenics; also found at the centennial project's website; links added.

On April 9, 1907 the Governor of Indiana signed into law a bill passed by the state legislature that is widely regarded as the world’s first eugenic sterilization legislation. To mark the centennial anniversary of this legislation, the following events will provide a forum to reflect on the legacy and relevance of this history to current discussions on reproductive rights, applications of genetic science, and our best intentions to improve the lives of people in our communities. 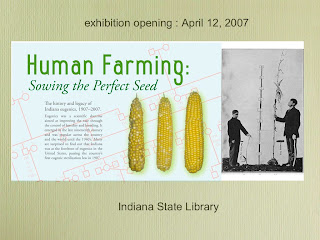 
SYMPOSIUM: “History and Legacy of Indiana Eugenics”
Free and open to the Public; Registration recommended

[Image: the "Human Farming" exhibit poster, showing three ears of corn in ascending size, next to a black-and-white vintage image of two men standing in a field, one shorter than the other, holding a shorter plant than the other.]
Posted by Penny L. Richards at 11:54 AM