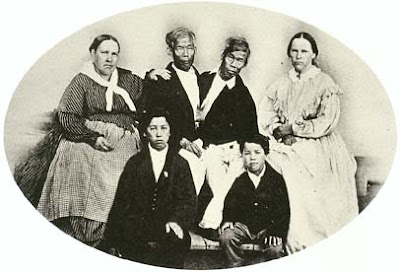 Asian history, Southern history, disability history--how about all three? On this date in 1811 (by tradition), conjoined twins Chang and Eng were born in the province of Samutsongkram, Siam (now Thailand), to ethnic Chinese parents. The boys' bodies were connected at the chest, by a band of cartilage that joined their sternums; they had two livers, but the organs were fused. When they were teenagers, a British merchant hired them from their mother for a world tour. They parted ways with their managers, after a few years, and took control of their own exhibition schedule. Thus (unlike many human attractions of the day) they made a fortune. They returned to the exhibition circuit whenever they needed more money quickly. Their billing, "The Siamese Twins," became a popular term for all conjoined twins.

With their fortune, they bought a plantation (and slaves) in North Carolina, adopted the surname Bunker, and in 1843 married local sisters Adelaide and Sallie Yates. Over the next twenty years, Chang and Adelaide had ten children together; Eng and Sallie had eleven or twelve children together (sources vary). Their children were often included in publicity photos such as the image above; in part because they too were a "curiosity," in a time and place when Asian facial features were seldom seen, and in part because they were part of the men's display of "normality" and masculinity. Chang and Eng Bunker died a few hours apart in the winter of 1874, at the age of 63.

The twins' tour routine included a medical examination in each town--in part as publicity, and in part to counter charges of fakery. So there's an extensive archival record of newspaper accounts and medical opinions on the men's bodies. There's also a small collection of their papers in the Southern Historical Collection, Wilson Library, University of North Carolina...and a popular exhibit about Chang & Eng at the Andy Griffith Museum in Mount Airy NC (an unexpected juxtaposition, perhaps, but it's near the site of their homes, and they're buried in a churchyard nearby). Like many large Southern families, the descendants of the Bunkers now hold annual gatherings in Mount Airy.

In 1999, a bronze monument to "In-Jan" (as they're known) was dedicated near their birthplace in Thailand. And in 2001, a bridge in Surry County NC was named the Eng and Chang Bunker Memorial Bridge in their honor--because it is a "twin bridge."

Image above: A well-known c1865 portrait of the Bunkers, seated between their wives; two boys (Patrick and Albert) are seated at their fathers' feet. The photo was taken by Civil War photographer Mathew Brady.

Alice Domurat Dreger, One of Us: Conjoined Twins and the Future of Normal (Harvard University Press 2005).

I would very strongly recommend The Girls by Lori Lansens, a novel telling the story of a pair of conjoined twins in their own words. A wonderfully written book, with so much to say about the nature of disability and being "different".

hola me llamo faviola i love you funky mango