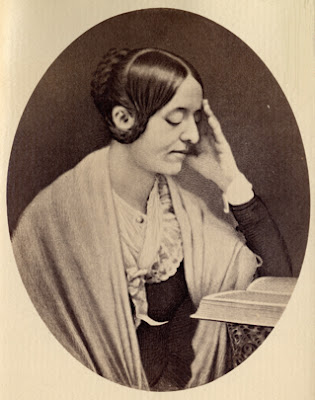 Today is the birthday of American writer Margaret Fuller (shown at left). She is best remembered as the most prominent woman among the American Transcendentalists, a friend of Emerson, and the author of Woman in the Nineteenth Century (1845). She had lifelong migraines that she traced to her early education. Fuller believed that her ambitious father's rigorous schedule of late-night study gave her "premature development of the brain...which at the time prevented the harmonious development of my bodily powers and checked my growth, while, later, they induced continual headache, weakness, and nervous affections of all kinds...even, although I have learned to regulate and understand my now morbid temperament--to a premature grave." (from Fuller's Memoirs, 1851: 7, as quoted in Davis 1999, cite below). This theory was in keeping with the mid-19th century fear of "precocity," considered one of the worst things a parent could nurture in a child, because it would overtax their small growing bodies and imbalance their further development.

Fuller taught her younger brothers, especially after their father's death left the family resources strained. Her youngest brother, Lloyd, was considered strange and backward, hard to manage. Margaret remained his champion: "Fit out the children for school, and let not Lloyd be forgotten," she wrote to her widowed mother in 1837. In another letter, she reminded a doubting brother that Lloyd "can be influenced by kindness to do his duty" (from letters, both found in Hudspeth, as quoted in Richards, see below).

In her journalism, Margaret Fuller was among the first to report on asylum conditions in the nineteenth century. From Paris, she wrote for American audiences about the innovative "School for Idiots" in that city, and the possibilities she saw there for better care and education:

I wept the whole time I was in this place a shower of sweet and bitter tears; of joy at what had been done, of grief for all that I and others possess and cannot impart to these little ones....I thought sorrowfully of the persons of this class whom I have known in our country, who might have been so raised and solaced by similar care. I hope ample provision may erelong be made for these Pariahs of the human race...

Fuller died long before her time, not from her "morbid temperament," but in a shipwreck off the coast of Long Island. She had just turned 40, and perished with her husband and son on their way back to the US from Italy.

Thank you - thoroughly enjoyed this post. My grandmother used to ascribe to a theory that a child reading too much and studying too much would "be their ruin". Of course she was a flapper in her time - so I never took her ideas on education much to heart.

I ran across Fuller's writings on the asylum when I was in high school and read some of the transcendalists' writings. They were remarkable.