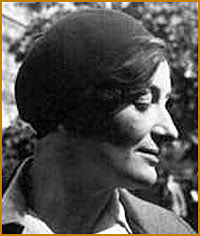 "I think it was perhaps the most important thing that happened to me. It formed me, guided me, instructed me, helped me, humiliated me, all those things at once. I've never gotten over it, and I am aware of the force and power of it."

So said American photographer Dorothea Lange (1895-1965, pictured at left, in profile), about having contracting polio at age 7. She walked with a limp throughout her life, and experienced post-polio syndrome in her later years, before she died from cancer at age 70. She's best known for the 1936 "Migrant Mother" photograph, which depicts Florence Thompson, an Oklahoma woman, with two of her children, in California during the Depression.
Posted by Penny L. Richards at 10:31 PM

What a wonderful quote.

I am so touched you would write about dorthea lange...she is one of my favorite photographers and her best-known dustbowl madonna has remained with me to this day: it was accurate of its time.

(Thanks also for including me on your site. I am happy to see what you blog---it reminds me of what I am also trying to do for PWEs: expand the possible horizon away from isolation...Many thanks)