MacArthur Fellows 2006--a few to watch 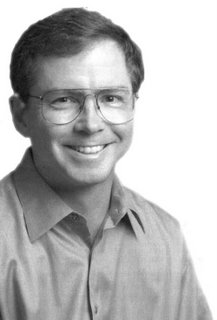 BlindConfidential and Kestrell have today pointed out that one of the newly announced batch of twenty-five MacArthur Fellows is Jim Fruchterman (left), CEO of The Benetech Initiative, an engineer who has taken particular interest in designing software and technology for human rights and literacy applications; Benetech's Bookshare.org is "the world's largest library of scanned books and periodicals [for] people with visual or print disabilities." Says BlindConfidential, "the word 'genius' may be an understatement" when describing Fruchterman's enthusiasm, energy, and effectiveness.

There are a few other new MacArthur Fellows who work on disability-related projects. D. Holmes Norton, MD, is director of the Clinic for Special Children in rural Strasburg, PA, treating Amish and Mennonite children with rare genetic conditions, with attention to the supports that will work in their communities; Norton's work has reduced local infant mortality and improved outcomes for newborns since the Clinic opened in 1989.

Anna Schuleit is a young German-born artist whose work involves multimedia commemorative installations around defunct mental institutions. Her Habeas Corpus (2000), for example, rattled the walls of the Northampton State Hospital in Massachusetts with Bach's Magnificat, for an audience composed of former hospital staff and inmates. She has also used flowers and choral performances to mark sites of past pain, current emptiness, and common humanity. Her MALS project at Dartmouth, "Ladies and Gentlemen: An Artist's Book" (2005) uses fragments of paper and rust from Northampton to create a bound volume of poignant extracts and haunting details.