Some historical US Congressmen with disabilities 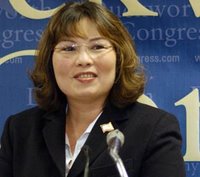 A commenter on my July post titled An incomplete list of disabled MPs asked about historical US legislators with disabilities. I said I'd look into that. Now we're heading into a midterm election season with at least one disabled Iraq War veteran (Tammy Duckworth in Illinois, pictured at right) running for Congress, and it seems a good time to revisit the question.

We've already discussed General Daniel Sickles (1819-1914) in an earlier blog entry: he lost a leg in the Civil War, and served in Congress afterwards. He wasn't alone. Here's a short list of those I could find in the Dictionary of American National Biography online:

Into the twentieth century, Ira Clifton Copley (1864-1947) was blind from an early childhood case of scarlet fever; he was elected to the House of Representatives in 1910, and remained in Congress until 1923. Eugene Millikin (1891-1958) was a WWI veteran with arthritis, who used a wheelchair during some of his years in the Senate from 1941 to 1956). Olin Earl Teague (1910-1981), whose leg was permanently damaged in WWII, served in the House of Representatives 1946-1978; before Teague retired from Congress, his foot was amputated as part of his continuing treatment from war wounds. John Bell Williams (1918-1983), lost an arm and part of a leg in WWII, and served in the House of Representatives from 1946-1967 (and was later an anti-civil-rights Governor of Mississippi).

There are surely more. A number of WWII, Korea, and Vietnam-era disabled veterans in Congress are still alive, so they're not listed in the Dictionary of American National Biography --yet.

What about Senator Bob Dole who had limited use of his arm due to his service in WWII, Representative Tony Coehlo who had epilepsy, Senator Michael Dukakis who had depression, and I am sure there are more.