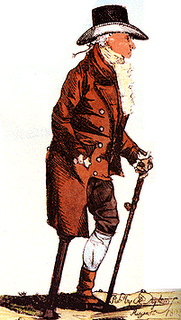 Natalie Bennett wonders, "There must have been disabled early modern MPs - certainly you’d think after all that Civil War fighting. Anyone know any?" The Guardian article she cites mentions Henry Fawcett (MP 1864-1874; he was blind), and the noted 19c. Irish MP Arthur Kavanagh, who was "born with vestigial arms and legs."

How can I resist tracking down some answers? Thanks to the search options at the Oxford Dictionary of National Biography, I can at least list a few disabled members of Parliament from before 1900 (all found using the search combination "MP" and "leg"--just as an experiment):

Very interesting! What about on the East side of the Big Pond? We know about FDR with post polio, but do we have any MP equivalents? That would be our Senators, right?

Oh sure, Arlene! Plenty of Congressmen and Senators with disabilities. I wrote about Daniel Sickle here a little while ago, in a post about the Bain Collection. Sickle used the insanity defense (successfully) in a murder case while he was a sitting Congressman in the 1850s, and later served another term using a wheelchair and crutches, after a Civil War cannonball injury took his leg.

Using the same strategy as I did in this post--searching the ANB using the words "Congress" and "leg" -- should yield plenty for the pre-1900 era (and there are plenty now too, of course). I'll try that sometime!

Michael Davitt, an Irish nationalist politician who was MP for West Mayo in the late 19th century, lost his right arm in an industrial accident when he was a child.

I'm curious: do you think we can use "disability" as if it's an ahistorical category? I assume that an awful lot of people who made it to middle age in the early modern period ended up with some sort of impairment that we'd today consider a disability. Would "disability" still be disability if it were considered the norm?

I could be totally off base with that. I don't know nearly enough about disability history, and I'm just talking off the top of my head here!

Right, that's always the question in disability history. The way I'd frame it is this: the men I listed had an experience of bodily difference, and impairment; that experience was given various meanings by their historical context, but today we see them as part of the history of disability.