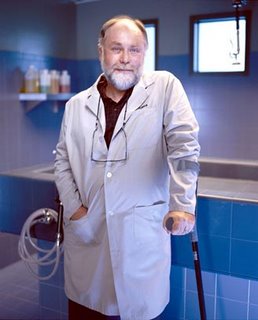 On Saturday, the third annual Disability Pride Parade will wind through downtown Chicago, with the theme Disabled and Proud 2006: Celebrating Disability Arts and Culture. The grand marshal is actor Robert David Hall from television's CSI (pictured at left), who is also national chairman of the Performers with Disabilities Caucus of the Screen Actors' Guild. Among the bloggers in attendance, watch for Croneway (anyone else?).

You can't actually march in the parade if your contingent didn't register before July 5, but you can still watch and cheer on the parade, offer rides to/from the route, or attend some of the ancillary events (an open-mic/poetry slam on Friday night, and a film festival on Saturday night). Interested but not in the Chicago area? The organizers are also welcoming tax-deductible donations to help defray some of the costs of the parade.

What's the occasion? July 26 marks the 16th anniversary of the signing of the Americans with Disabilities Act. There will also be picnics in New England, a walk-roll-or-run in Florida, an anniversary celebration on Capitol Hill, a town-hall meeting at the National Press Club... and maybe something near you, too.
Posted by Penny L. Richards at 1:37 PM