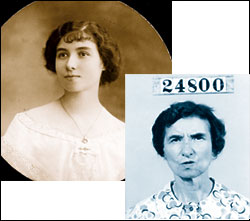 When the Willard Psychiatric Center near Albany NY was closed in 1995, 400 inmate suitcases were found in an attic, covered in dust. They contained the belongings of patients at the moment of their arrival (many expected short stays): letters, photographs, books, diaries, even handmade quilts, silk gloves, sheet music. I remember reading about the 2004 exhibit at the New York State Museum, and wishing I could see it. Now, there's a new online version, and a touring version too, so many more of us can explore these artifacts and learn more about the suitcases and their owners. Never has "Click to Enter" seemed so ominous a request.

The bricks-and-mortar version, and its online successor, share the structure of presenting a few of the suitcase owners' stories in detail, drawn from their own possessions and the hospital's records of their decades as inmates. As it's my research interest, I'm caught most by the women's stories:
One of the men stayed for 62 years, from 1919 to 1981--even hospital officials admitted in the 1960s that his admission was "a mistake." And these are only a few stories from hundreds found in the attic, from many thousands at Willard and other similar hospitals across the US. Go look in their eyes; look through their possessions (which no heir has come to claim); many had family, friends, jobs, cars, skills, college degrees. Nonetheless, it didn't take much for circumstances to place them all in a mental hospital for life. And only now are their stories being told.

[Thanks to Arlene Wilson for giving us the link to this online exhibit in comments.--PLR]