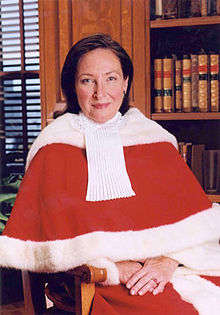 It's Canada Day, and it's also the sixtieth birthday of judge Rosalie Silberman Abella, who was appointed to the Canadian Supreme Court in 2004.

Justice Abella wrote for the majority in the big immigration cases last fall, Hilewitz v. Ministry of Citizenship and Immigration, and deJong v. Ministry of Citizenship and Immigration. In both cases, families who tried to immigrate to Canada were initially turned away, because their disabled children might impose "excessive demands" on state services. Wrote Abella in favor of the families:

The issue is not whether Canada can design its immigration policy in a way that reduces its exposure to undue burdens caused by potential immigrants. Clearly it can. But here the legislation is being interpreted in a way that impedes entry for all persons who are intellectually disabled, regardless of family support or assistance, and regardless of whether they pose any reasonable likelihood of excessively burdening Canada's social services.

Abella herself was once an immigrant child: she was born in a displaced persons camp in Stuttgart, Germany, to parents who had survived the Holocaust. The Silbermans immigrated to Canada in 1950, and twenty years later their oldest daughter graduated from law school. In 1975, she became the youngest person ever appointed to the bench in Canada (and the first pregnant judge in Canadian history too).