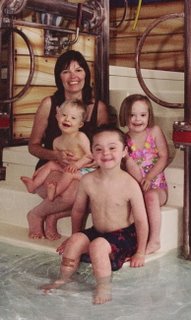 (Learned about this story from Nicole. Thanks for the heads up!)

Jan in Indianapolis was excited to learn that her handsome little son Nash (front and center in the image at left) was going to be featured on the cover of Indy's Child, which bills itself as "Central Indiana's Only Parenting Publication." She understood that the kids--all found through a call to the Indianapolis Down Syndrome Foundation-- were photographed at a pool, in swimsuits, because they were shooting the cover for a "Summer" issue.

That's not what happened. Instead, the photo was used for the current special issue on "Maternity" (shown here, below) --where it is apparently meant to relate to a story about pre-natal testing. The story features a mother saying, "I was fortunate. My daughter was born May 12 and shows no signs of Down syndrome. That's reassuring." There are no quotes from families who are happy to have 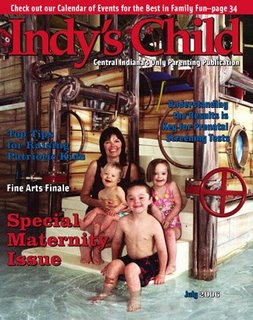 Did someone at the magazine think the families of these smiling children were, by contrast, unfortunate? The parents would never have consented to have their children pose as someone's worst-case scenario.

As you'd expect, Jan is feeling terribly betrayed. She's posted the address of the Indy's Child editors at her blog, in case others want to express dismay at this misguided juxtaposition. The families surely deserve an apology, and the magazine's readers deserve better information.

UPDATE Wednesday morning (5 July): Indy's Child has now pulled both the pre-natal testing story and the cover art from its website.

UPDATE Thursday (6 July): Jan writes at her blog, in an update to the above link, "Received a call from the VP of Indy's Child today. The Publisher and the editor (married couple) are in London vacationing and will return July 10th. Profusely apologetic he was, they never have received a response like this, positive or negative, in their 20 year history, meeting to be scheduled asap upon their return. While its good to be acknowledged, what is sad is that he said they had NO IDEA what they did.....we have some advocating to do people." Indeed.

UPDATE Monday (24 July): I just clicked on the Indy's Child link again--now the cover art is back up--but without the "Special Maternity Issue" or "prenatal tests" headlines. So, the cute kids stay, the story goes. And according to Jan's blog, the magazine is going to make it up to the IDSF by covering the annual Buddy Walk prominently, and featuring a story about families and Down syndrome sometime in the near future.
Posted by Penny L. Richards at 9:08 PM

For a non-public person, this comes awfully close to libel: detrimental, fallacious.

Well that is one less magazine I will read. I would encourage anyone who see this rag in places like dr.s offices to ask whomever is in charge to put a more reliable mag. in their office. You know like the "National Enquirer" or "Star"

Amazing how ignorance gets published . I am embarrassed for the magazine . Lets hope their error gets corrected .

As a mother of a child with down syndrome, I am very saddened by this article and of the ignorance the magazine has over its published articles. I hope you take this opportunity to reflect on the hurt you have caused many people and make it right.

Amazing, beyond belief arrogance and insensitivity. That these idiots could take such a beautiful picture of poolside fun, with the parent's participation, and then pair it with a story about what your options are to screen and scrape such unfortunate genetic mishaps is unbelievable. That magazine is not worh using in an outhouse, I hope they lose half their subscribers.

I do not live in the Indianapolis area. Would someone be so kind as to obtain a copy of the magazine and post a list of the advertisers?

Yesterday they pulled the cover and article from their website...that's a start!