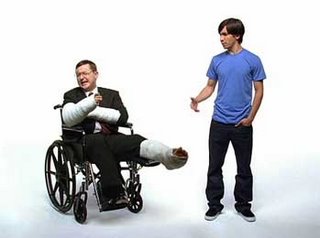 So Stephen Kuusisto and Wheelchair Dancer have weighed in so far about the new "Accident" ad from Mac, in which the PC played by John Hodgman is seen in a wheelchair, with two arms and a leg in casts, explaining that someone tripped over his power cord. (There's a still shown at right; the video version is at YouTube.) It's meant to point out that Macs have a magnetic cord attachment that easily detaches when tugged. But...hmmm. They're still playing with the wheelchair = broken cliche. I agree with Wheelchair Dancer that they're trying really hard to emphasize the "injury," not the "disability"--thus the giant plaster casts. But still.

Beth Haller pointed out an alternative in 2001: An award-winning Cingular Wireless ad aired during the Superbowl that year featuring Dan Keplinger, an artist who uses a wheelchair. There, the message was about self-expression, changing attitudes, adjusting expectations upward, and embracing the new. It can be done.
Posted by Penny L. Richards at 3:45 PM

Yeah, though Hodgman isn't really that old in years--he's 35, according to IMDb. And Justin Long is older than the kids he sometimes plays--he's 28. They just play a stuffy/cool contrast, and it reads as old/young.

They need to do a retraction or pull the commercial. It is patronizing on the best end, and demeaning on the worst.

Ugh! I saw this recently while at a friends house who has television (another reason I am happy to go without!) and I was outraged. Being the only crip in the room I did feel a bit outnumbered though in my take on the subject. I was fuming at the symbolism while everyone else wondered what the big deal was. Hmpf! I am glad to see that others felt the same way :)

okay, you can all feel free to take away my membership, but I totally disagree. I think even the least socially educated can tell the difference between the stuffy PC guy with plaster casts in a wheelchair and, say, me. And the thing is - parts of me are broken. Guaranteed if certain parts of my body worked more the way they were designed to, I would not be in this chair out of choice.
I get your protest regarding the propagation of an old wheelchair = broken stereotype, but I really don't get the pressure to censor a commercial because it might potentially reinforce that stereotype.
I honestly don't find it demeaning. I think it's a funny ad - and that we do need to remind ourselves to lighten up and appreciate the metaphor they are going for in this. That actor is portraying a computer system. He's supposed to look "broken."

Well, it's not the first ableist-type commercial from Apple recently, so I'm not surprised...

It wasn't long ago that they had another one with a similar pair. The PC was just like the awkward socially-inept 'geek' stereotype of some neuro disabilities that is the target of bullying and pushed into "therapy" so he looks more like the Mac guy. In fact, the PC guy looks like Bill Gates, who shows a *lot* of autistic traits. So it's another ableist message, just that the new one focuses on mobility impairment while the old is on 'social' disability. (Note that I don't agree at all that PCs are "disabled" in reality compared to Macs; it's just the stereotype.)

I'm also not surprised because Apple has *always* been about surface eye-candy appearance, being part of a cool/trendy crowd, and so forth. Their typical slams against other OSes tend to revolve around their lack of visual attraction, that they (theoretically) need extra care, and so forth -- all things reminiscent of disability stereotypes. Their marketing department has, all the way back to the early 80s, relied primarily on putting other systems (or their users) down. Now *that* isn't cool in my book.