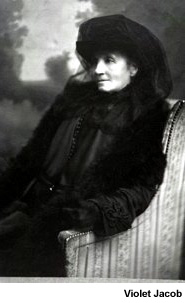 September 1 was the birthday of Scottish writer Violet Kennedy-Erskine Jacob (pictured at left), who wrote historical novels, children's literature, poetry, a history of her family's estates, and letters from India. She illustrated her diaries with her own watercolors. Her imaginative writings often involve heavy but authentic use of the Scots dialect. Here's an example, about a disabled WWI veteran and the changed dynamics observed in his marriage after his return from war:

FINE div I ken what ails yon puddock, Janet,
That aince wad hae her neb set up sae hie;
There's them that disna seem to understaun it,
I'se warrant ye it's plain eneuch to me!

But noo he's hame again, ye wadna ken her,
He isna feared to contradick her flet;
He smokes a' day, comes late to get his denner,
(I mind the time she'd sort him weel for that!)

What's garred her turn an tak a road divairgint?
Ye think she's wae because he wants a limb?
Ach! haud yer tongue, ye fuil-the man's a sair-gint,
An there's nae argy-bargyin wi him!
[In sum, a neighbor, Kirsty, says that Janet used to be snobby and domineering to her husband, but since he's come home from war she's sweeter to him, and he smokes and comes in late, without suffering her wrath. Kirsty says it's nothing to do with his missing limb; Janet's husband is just less afraid of her, after his military experience.]
Posted by Penny L. Richards at 5:42 PM