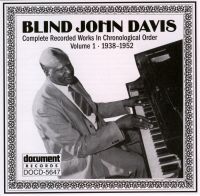 Bluesman John Henry Davis, best known as Blind John Davis, was born on this date in 1913, in Hattiesburg, Mississippi. He was raised in Chicago, and lost his sight to an infection when he was nine years old. He learned to play piano in his teens, and by twenty had his first band, Johnny Lee's Music Masters, that played around Chicago speakeasies. From 1937 to 1942, he was the house pianist at the Wabash Music Company, and played on over a hundred recordings. He toured with his band, the Johnny Davis Rhythm Boys, during WWII, and formed the John Davis Trio in the late 1940s. After 1951, he played mostly solo; in 1952, he toured Europe with Big Bill Broonzy, and recorded on a French label. Many successful return trips to Europe followed, in the 1970s and 1980s, including a number of German and Dutch recordings. He also played blues festivals around the US and Canada. There are tracks by Davis available online, and some CDs in print.
Posted by Penny L. Richards at 7:13 PM