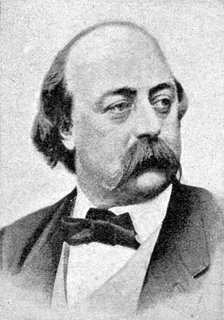 Born on this date in Rouen was French writer Gustave Flaubert (1821-1880, shown at left). The onset of epilepsy in 1844 ended his (already wandering) interest in the study of law, and he lived at home with his mother for many years, in part out of concern for his own safety. In his best-known work, Madame Bovary (1857), Flaubert wrote a secondary character, Hippolyte, whose club foot doesn't bother him or interrupt his farm work, but doctors persuade him to have it "fixed" anyway--and he ends up with an amputation when the surgery goes wrong. His epilepsy was a secret and a rumor during his lifetime, when he would only refer to "my nervous attacks." Its possible effects on his writing have been a topic of speculation beginning with a comment by his friend Maxime Du Camp in 1882:

I am absolutely convinced that Flaubert was a writer of rare merit, and had he not been attacked by his terrible nervous illness he would have been a writer of genius.

Sartre and Vargas Llosa both considered Flaubert's seizures to be hysterical or affective, rather than entirely organic, in origin. More recent opinions have disputed this judgment.

Here are some print sources on Flaubert's epilepsy:

Flaubet...when I read "Madame Bovary" in high school, someone suggested that he might have had E. and I can recall telling that person they were wrong.

I also recall the chill I got along the center of my spine when I discovered that they had been, in fact, quite right. I wept for him and for myself.

Thanks for writing this.
Cordially,
Paula Apodaca
E. is for Epilepsy by Paula Apodaca
http://www.epilepsy-paula.blogspot.com