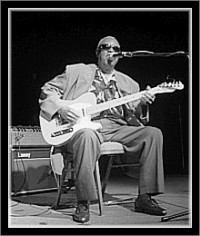 I didn't have it hard as some people, but I think what I had, it was hard enough. The hardships I had I'm glad about. I appreciate that. Because I know how to treat people.

December 9, 1927, bluesman Cootie Stark (shown at right) was born Johnny Miller in Abbeville, South Carolina. He was considered one of the last of the old Piedmont Blues guitarists. When he was a boy, someone suggested to his mother that he could attend a blind school in Spartanburg (possibly the state school for the deaf and blind, aka the "Cedar Springs School," where fellow Piedmont bluesman Gary Davis went years earlier). "I wanted to go, but she didn't let me. Back in those days she thought they might be mean to me. That's the reason why." Instead, he took up the guitar.

Stark performed extensively, and powerfully, but hadn't recorded anything before a 1997 session (organized by the Music Maker Relief Foundation) that became the CD Sugar Man. His last years were marked by renewed interest in his work, and he was performing at festivals and awards shows until his last months. "They say the older you get, the more fun you gonna have, and I believe them now," said Stark in a 1998 interview. "I just wish I'd had some of this a long time ago." (Three tracks by Stark, "Metal Bottoms," "Sandyland," and "Blue Smokey Mountain," can be found on the MMRF website.)

December 9 was also the birthday of English poet John Milton (left, 1608-1674). He wrote his masterpiece Paradise Lost (1667) after he'd become blind, composing the verses in his head at night, and dictating them the next day. (Dartmouth also has the Paradise Lost text online, in English and Latin, with notes, using a frames layout.) The front matter by Milton's assistant and fellow poet Andrew Marvell begins: "When I beheld the Poet blind, yet bold/ In slender Book his vast Design unfold..."

I really enjoy the profiles of historical people with disabilities that you feature.

FYI: I've just recently put together a public blog where I post some of my previous writings on disability, feminism, abuse and other topics along with more current writing and links to articles and blog carnivals on disability. I've linked to your blog on mine. My site is: http://fallingoffmypedestal.blogspot.com

Hoping to get to the point where I can offer to host one of the future Disability Blog Carnivals. :-)

I'm glad to hear it, because I enjoy assembling them (more soon, too). I'll be checking out your blog next... thanks for writing.