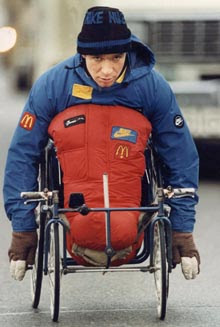 Canadian Paralympian Rick Hansen (pictured at left, on his "Man in Motion" world tour) is turning 50 today--he was born on this date in 1957, in Port Alberni, British Columbia. He was an athletic kid who excelled in several sports. When he was fifteen, he was paralyzed from the waist down in a car accident. So he turned to wheelchair sports, and was more competitive than ever: he became a national champion player in wheelchair volleyball and wheelchair basketball, and a world-class wheelchair marathoner. Hansen won a gold medal at the 1980 Summer Paralympics.

Hansen's 1985-87 "Man in Motion" tour took him wheeling through more than thirty countries, over 26 months, 40K kilometers, to raise money for spinal cord research and other causes. The wheelchair he used on that tour is now in the museum of the BC Sports Hall of Fame. There are video and audio clips of the news coverage of Hansen's world tour here.

Hansen is now president and CEO of the Rick Hansen Foundation, which raises money for research and support programs related to spinal cord injuries. He's married, and the father of three daughters. There are three Canadian public schools named for Hansen, and one township in Ontario--right next to Roosevelt Township, it is (it was named Stalin until 1986, so I'd guess they were going to change it anyway?).

Bit of 80s trivia: you know the title song for the 1985 film "St. Elmo's Fire"? It's about Rick Hansen. Lyrics include: "Gonna be your man in motion/All I need is a pair of wheels." (See, that never made sense for the movie, but it makes sense now, doesn't it? Mystery solved.)
Posted by Penny L. Richards at 12:01 AM

Rick Hansen is a big deal in Canada. He has done a lot for the disability community there. He deservs a national Rick Hanson day.

Ironically I was using a hand bike for the first time on this day at mile Zero where Hansen finished his transcanada trip - and my opinion after 5 miles on a hand bike was "what kind of sadist would go across Canada much less the rockies on a hand bike?" - so I guess I gained a deeper appreciation that day.