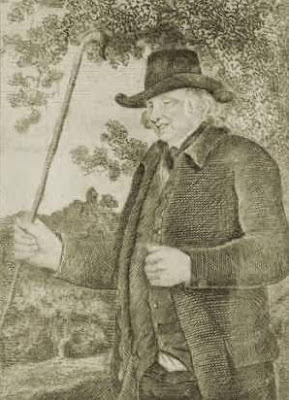 Colorful, long-lived Englishman and civil engineer John Metcalf was born on this date in 1717, in Knaresborough, north of Leeds. When he was six, young John survived smallpox, but lost his sight to the disease. His family, thinking he'd have limited career choices, arranged for him to be taught the fiddle, and he learned to play well. He also knew a lot about horses, cards, and hunting, and was a good swimmer and diver. He married and was the father of four. He was briefly in the army in 1745 (not in combat, but moving guns and assisting a recruiting sergeant).

As a young man, he walked to London ahead of his travel companion, and in his twenties he carted fish and other goods from the coast to Leeds and Manchester, or between York and Knaresborough. His business became a stagecoach line, and he drove the coach himself. So he knew the roads very well when, in 1765, he won the contract to build three miles of new road between Minskip and Feamsby. He would, eventually, build about 180 miles of roads, noted for their good drainage and foundations.

[Image above: a drawing of Metcalf, made late in his life by J. R. Smith, 1801; for use in the published editions of Metcalf's autobiography. He's shown as a robust figure, holding a cane and wearing a hat and coat, with white hair curling down over his ears and collar]
Posted by Penny L. Richards at 12:25 AM

This is a great bio- many of my blind and visually impaired friends tell me they, too,have driven (although not stagecoaches) when I've been at Ski for Light with them. Not just cars with voice assisted help from someone - but farm equipment (on a regular basis) , for example.